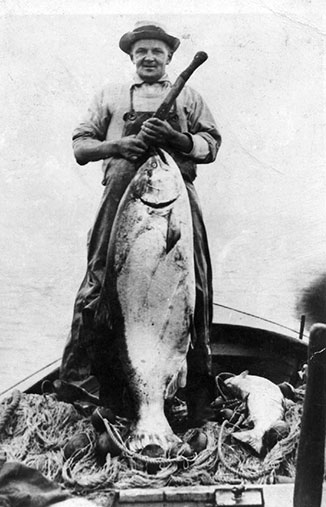 After furs, salted salmon was the next product the Hudson’s Bay Co. developed  on the lower Columbia River, beginning in 1823. Success was limited by the poorly-made, leaky barrels and lack of sanitation that caused some of the fish to spoil. But by 1831, progress had been made in packing the fish so that a trade was established with Hawai’i, San Francisco, and Hudson’s Bay posts in British Columbia. Other small companies came and went during the 1830s and 1840s, shipping salt salmon to the East Coast and elsewhere, but all found the Hudson’s Bay Company too formidable a competitor. Salmon salting reached its peak in the 1860s.

In 1866 William Hume and his brothers almost single-handedly launched the historic salmon-canning boom on the Columbia River. The Humes and their friend Andrew Hapgood began canning salmon near Eagle Cliff in Wahkiakum County, Washington. Andrew Hapgood’s workers made the cans by hand, which was a laborious job. The bodies of the cans were cut out by shears, then formed in cylinders and the seams soldered together. The bottom of the can was cut out as a circular blank, and placed in a press to form the bottom of the can. The end was then slipped onto the cylindrical body and soldered together.

Workers then filled the cans with salmon, and passed them on so the tops could be soldered on. The tops had a small vent hole in them to exhaust the steam while the fish cans cooked in boiling water. After cooking for an hour, they were removed and the vent hole soldered shut. The cans were then re-cooked for another hour, removed from the boiling water, cooled, washed with soap and water to remove grease, and after several days painted with a mixture of red lead, turpentine and linseed oil.

While the Humes attempted to keep the canning process a secret, this proved to be impossible. By 1880, eight canneries were operating on the Columbia, with six more under construction. The proliferation of canneries that occurred during the late 1880’s resulted in declining salmon runs with the packers struggling to purchase enough fish to keep their operations running full-time. The rapid growth of the cold storage and mild cure business created even more competition, which encouraged the formation of a salmon canners’ trust on the Columbia River–the CRPA. Excerpted from Flight of the Bumble Bee, by Irene Martin and Roger Tetlow

Want to join the discussion?
Feel free to contribute!