Inhabited for thousands of years by coastal Native American tribes, Astoria is the oldest U.S. settlement west of the Rocky Mountains. Lewis and Clark spent the winter of 1805-06 just west of Astoria at Fort Clatsop. John Jacob Astor’s Pacific Fur Company began operations there in 1811, and built Fort Astoria, only to have it and the trading enterprise sold to the British just a few years later.  By 1847, Astoria was a significant outpost and is home to the first U.S. Post Office west of the Rocky Mountains. In the late 19th century a large immigrant population from China provided the labor to catch and process salmon, for a burgeoning market worldwide. Beginning with the Chinese Exclusion Act of 1882, a series of laws were passed over the next 20 years that ended immigration from China.

Europeans, especially Scandinavians, arrived in Astoria around 1900 and became a major part of the fishing industry and Astoria’s culture. The salmon runs were becoming seriously depleted by the 1920s, and local companies turned to catching and processing tuna in the 1930’s. By 1980, the tuna industry had moved on to other locations, and Astoria slowly began to re-discover itself. The Lewis and Clark Bicentennial in 2005-06 sparked a significant rebirth of the community and since then Astoria has become well-known for its cultural heritage, music and arts festivals.

Andrew B. Hammond came to Oregon in 1894 from Missoula and began an aggressive acquisition campaign, snapping up railroads and timber interests, including the Astoria and Columbia River Railroad. Hammond recognized that the salmon industry was over-capitalized and in 1899 began buying, organizing, and consolidating packing companies into the CRPA. His vision involved acquiring all the salmon canneries on the Columbia River, which would operate as one company. When the CRPA formed in 1899, it acquired the holdings of seven packing companies, for a total of 10 canneries. CRPA ultimately merged with Castle and Cooke, Inc., in 1961 and changed its name to Bumble Bee Seafoods. Bumble Bee had been a brand used by CRPA from its beginnings, at first exclusively for sockeye salmon, also known as “bluebacks.” As the salmon runs diminished, the company canned more tuna, and the Bumble Bee brand took on additional importance.

The Hanthorn Cannery was opened by J.O. Hanthorn in 1875. It was not the first cannery, but has outlived all the earlier operations, and now holds the proud title of the oldest cannery pier on the entire Columbia River. Hanthorn had been a tinsmith in Portland before he entered the salmon packing field, which gave him an advantage in the new industry. Unfortunately, in 1891 his daughter Hazel fell through a trapdoor in the boatshop floor and drowned. Hanthorn was devastated by this loss and had great difficulty adjusting after her death.  But the Hanthorn brand of salmon continued to grow and by 1894, the plant was producing 30,000 cases of canned salmon annually, much of it exported all over the world.  The facility at one time had a copper shop, butchering room, fillet room, liver picking area, net wharf, and a Chinese mess house. By 1900, Hanthorn  had laid the foundation for one of the strongest seafood marketing companies in the world. He sold the cannery to the Columbia River Packers Association (CRPA) and left Astoria, never to return.

By 1908 the facility had eight buildings on the pier, including cold storage units that currently house the Hanthorn Cannery Museum. In 1932, the cold storage units on the east side of the pier were constructed. In 1943 more buildings were constructed on the west side of the complex, and today this is the Rogue Public House. The company’s location on 39th St.  continued to develop and has been known by many names: CRPA Cold Storage, Bumble Bee Cold Storage, Astoria Seafood, Astoria Cold Storage etc. These serve as storage for many of the artifacts the Foundation has collected. 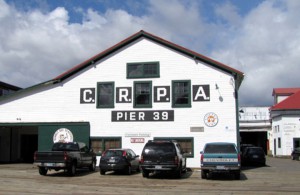 While much of this industry has fragmented in the last 20 years, its thriving early years provided jobs, livelihood and a future for many generations of families on the West Coast. Today, the oldest building at Pier 39 dates to 1875 and is currently the second floor of the center building and was placed on top of a lower story in the early 1900s. Today it houses a variety of private offices.